You are here: Home / Archives for Stephanie Spicer 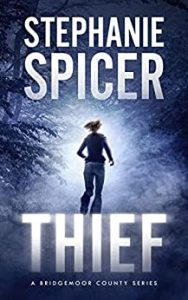 Jane Smith, or Val as she was known, is a single mother running away from the trauma of her past. Scarred and jaded, she’s learned the only person you can rely on is yourself. So when she’s caught by the local sheriff breaking into houses to survive, she knows she has to get away from him before he brings those she’s running from back into her life.

But with a missing diamond necklace, and Jane his only prime suspect, Owen Phillips has no intention of letting her out of his sight. Even if being close to her pulls something in him he thought was long dead.

Can they both get past their demons to find what they’ve longed for? Or will secrets from the past shatter their chance at coming out of the darkness?

What Inspired You to Write Your Book?
I love police and lawyer dramas. I love Romance novels. I wanted to blend the two, and the Bridgemoor County Series was created.