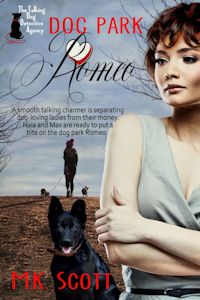 Nala and Max think they’re ready for anything, but when a smooth-talking charmer sets his sights on unsuspecting women and their hard-earned cash, Nala discovers she may be in over her head.

With overzealous friends and family eager to help, her former crush in need of her assistance, and the Dog Park Romeo a step ahead of everyone, it will be up to her to keep everyone in line and not lose sight of the goal. That proves more difficult than she anticipated when she learns what her former crush wants her to do for him.

Decoys, sting operations, foibles, mishaps, and affairs of the heart are only the beginning of what happens when good intentions turn bad.

Can Nala rein in the madness and prove she has the skills to bring an elusive thief to justice?

What Inspired You to Write Your Book?
I was asked by locals to write a series that took place in the surrounding Indianapolis area. Since I volunteer at the animal shelter, it is no surprise it included a rescue dog. This particular book deals with dog parks where a lot of dog lovers strike up friendships. Unfortunately, there are some scammers at the parks, too.

How Did You Come up With Your Characters?
It wasn't one thing. The millennial characters I took some traits from my daughter and stepdaughter's friends and applied them to the younger characters. The older characters have been squatting in my head for a while waiting to show up in a book.

Book Sample
“Karly,” Nala prompted, seizing an opening. She knew good and well her best friend was avoiding her earlier question. “Speaking of romance, whatever happened to you and Harry? You two were inseparable after Comic Con.”
“Oh, that didn’t work out.” She sighed a little, then said, “Happiness is a journey, not a destination.”
Nala stopped, pulling her dog to a stop as she did so. He sported a harness with an aluminum handle better suited for a blind person. She slipped on a pair of dark glasses to match the image. “Oh please. Everyone who says happiness is a journey is already where they want to be. Sure, it’s easy to say it’s not about the goal when you’re sitting in some big bucks mansion or starring in a hit television show.”
“It could be about the journey.”
“Give me a break.” She pushed up the slipping dark glasses. “I hate doing this, but you know in the winter months there’s no outside dining, and most restaurants aren’t accepting about dogs inside.”
“Yeah, what’s up with that?” asked the dog in question. Max, the handsome, black shepherd mix could speak, but would not bark on command for some reason. Instead, he chatted in English, courtesy of a disgruntled girlfriend—who happened to be a witch—of his first owner. Despite all the movies and children’s books about talking dogs, most people weren’t cool about it.
“Not now, Max. We’re talking about Harry,” Nala reminded both her dog and her best friend.
“Let’s just say it was fun while it lasted, but it’s over now.”
“Really? That’s it?” She stumbled as they approached the entrance of the restaurant. “These glasses are too dark. I hope this works”
Karly reached out to cup her friend’s elbow when Max spoke. “Leading her is my job. You, the one with hands, can open the door.”
Instead, a few diners leaving pushed open the door, releasing the smell of barbecued meat and onions, which caused Max to moan. “I expect some quality meat thrown under the table.”
The exiting diners murmured among themselves, probably commenting on the deep voice that either she or Karly had. It became apparent—shortly after she rescued Max from the dog shelter where her best friend worked—that people don’t believe in talking dogs. She’d just come off sounding crazy if she mentioned the subject. It was probably best not to. Many would take advantage of the situation.
“Step up,” Karly instructed. “I’m surprised your guide dog didn’t make you aware of the threshold.”
The comment made Max surge forward, almost tripping her. She managed to regain her balance and made it into the restaurant where the hostess asked if they wanted a handicapped table. Nala wasn’t even sure what that meant. Was the table different somehow? “No, a large booth will do.”
They made it to the booth without any mishaps. The waitress hurried off to find the one braille menu they had, giving Max time to settle underneath the table. Nala pulled the glasses down enough to take in the booth before sliding into it. “I’m not sure how anyone sees anything with these glasses on.”
Karly laughed and coughed. “Think about it.”
“Yeah, I know. As soon as I said it, I realized the obvious. By the way, I want the chicken barbecue sandwich with sweet potato fries. Oh, and an iced tea to drink.” Max shoved her leg with his heavy body. “Add a Texas Brisket with no sauce and steak fries.”
Her friend chuckled. “Good luck getting him to eat kibble after brisket.”
“Tell me about it.”

Buy this eBook on Smashwords