You are here: Home / Paranormal Romance / Goddess of the Moon by Clara Winter 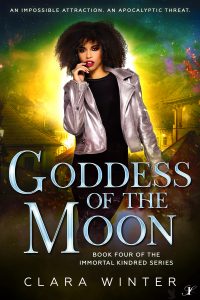 An impossible attraction. An apocalyptic threat.

After vanquishing a Celtic death demon, Selene should be kicking back and enjoying some free time. However, her life is anything but relaxed. She must travel to Romania, the last place she’d ever thought she’d be, facing another demon threat. Just another day at the office for the daughter of Cleopatra.

The situation soon escalates. The simple problem Selene thought she was facing, becomes intense–FAST. The dilemma is much greater than she initially feared. Throw in a sexy witch she doesn’t want to be attracted to, and her life really gets complicated.

Overconfidence leads Selene to make a mistake which could cost everything. Can she unravel the mystery before it’s too late? Or will her latest nemesis be the death of her and those she loves?

Goddess of the Moon is the fourth book of The Immortal Kindred Series and is set primarily in Brasov, Romania.

What Inspired You to Write Your Book?
This is the fourth book in my Immortal Kindred Series. The story is a continuation, and for this particular book, I was inspired by Romanian folklore.

How Did You Come up With Your Characters?
My Immortal Kindred characters came from a lot of brainstorming. I wanted to write about individuals with unique personalities and characteristics. It's been so much fun to see these characters grow and develop over the life of the series.

Book Sample
Before I could pick up the first trunk, I heard it. The dull sound of cloven feet pawing at the soft grass. Not a tone a mortal could hear, but for me, the scraping was as clear as a bell. The sound barely preceded the smell. Demons typically had some sort of pungent, unpleasant odor. This guy was no different. He smelled of days’ old refuse rotting in the sun.

I scrunched up my nose, releasing my tote which contained my laptop, letting it fall without grace to the earth. It was a good thing I paid extra for the durable case. If I was reading the situation correctly, the creature had me in its sights and would charge at any moment.

I knew what it was before I saw it, but this was not one of the creatures I had been hired to vanquish. The martolea were deceptive shapeshifters who could change their form at will. This one chose the form of a medium-size hound, as they most often did. Their diminutive size would lead one to believe they couldn’t possibly be much of a threat. But, as with a vicious dog, these guys were deadly and strong.

Author Bio:
Clara Winter grew up reading Anne of Green Gables, The Secret Garden, and Alice in Wonderland, while watching Buck Rogers, Star Trek, and Doctor Who. Writing her own stories naturally ensued. She is a wife, mother, and former school counselor, with a Master’s Degree in Counseling. Clara is from Colorado Springs, Co and currently resides in Mission Viejo, Ca. clarawinterbooks.com