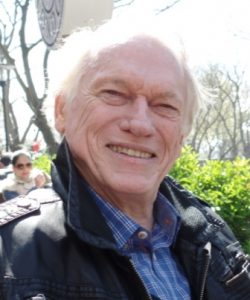 About Colin Guest:
Colin Guest (1940-2017) Born in England. He became an expat worker in 1983 and in 1988 obtained a contract down on the Turkish Mediterranean Coast. Here he and his late wife had a house built and moved to live there from their home in England. After her death in 2007, Colin later married a Turkish lady and now lives in Istanbul. Colin’s first book, An Expats Experiences of Living in Turkey, covers his living in Turkey for over 30 years. His second Follow in the Tigerman's Footsteps is intended to help readers discover that there is more to life than a tedious 9-5 job. Although a memoir, it reads more like an adventure story, with Colin living a life most only dream. Since then, Colin has had the following books published.
Terror Holiday, For the Greater Good, Impending Disaster and Fatal Love. Desperation Rules the Day is the first of a trilogy of published books re a planned terrorist attack on America. The second is Never Pull the Tiger’s Tail, with Colin now in the process of writing the sequel. He has recently completed the manuscript for Suzy’s Dilemma, which like A Dangerous Love Affair and Fatal love is a romance story mixed with erotica. Seven of Colin's books are available as audiobooks via Amazon ACX with one more due for completion shortly. Due to Colin’s deep concern about nature and the environment, he supports several organisations. These include Sea Shepherd and Care for the Wild/Born Free. From the latter, Colin has adopted a tiger for the past ten years. He worked as a volunteer at Wildlife Rescue/Rehabilitation centres in South Africa and Thailand and recommends animal lovers try this as a way of giving something back to nature.

What inspires you to write?
I have always been interested in writing since I was in school. Now that I am retired I have more time to follow my dream.

Tell us about your writing process.
I am a seat of my pants writer, I just think of a story and start to write. I try and portray my characters as near real-life as possible, and research details of locations that I use in my books.

How do you develop your characters?
My characters come alive as I write. I do not base them on real characters.

What genres do you write?: Fiction & Non-fiction