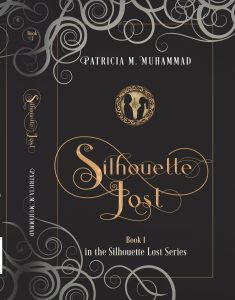 Yamaria achieves consciousness as a child, guided by an ethereal being. She inherits a locket, eventually accessing space and time. Yamaria courts her former university colleague, Salvatore. Antonio, a man who knew Yamaria’s mother long ago, transverses time seeking revenge against their world. Yamaria discovers that a rare heirloom will help her unlock the access to where space meets time. Yamaria and others from different worlds she encounters at the interstice defeat Antonio. One of them, Livianna dies. Time is paused. Basilia betrays them all. A mystical being that Yamaria had once known returns. Salvatore proposes to Yamaria. Not all is what it seems. Livianna returns from the dead. Gidadina still possesses the ancient text which shakes as a warning of something yet to come.

What Inspired You to Write Your Book?
Circumstance and a yearning to write beyond what I had been before. Silhouette Lost is the first of two fiction books I wrote. I wanted to use whatever spare time I had and one night I could not fall asleep. All these ideas were stirring in my head. I initially jotted some notes about the what names I would call the characters, whether their names would have any hidden meaning and a line or two about the main plot. Since then I generally do not outline or make notes. It was a time in my life in which a jolt of literary energy surfaced. Writing a novel was still new to me. I go into details on what inspired me to write this book in the preface of Silhouette Lost, now available as an ebook at select online retailers.

How Did You Come up With Your Characters?
Well, I have always written characters of multi-racial heritage. Italy is a country that I have always wanted to visit but have yet to. I thought it interesting to write the protagonist and some of the other characters to have at least partial Italian heritage. Yamaria's love interest is full European Italian. She is beautiful, bashful, intelligent, but capable. He is suave, intelligent and business savvy. Before they enter into the realm of unexpected possibilities, I understood that their complimentary traits would help guide them throughout subsequent adventures throughout the series. Where and how, I had yet to imagine.

Book Sample
Salvatore had settled Basilia and Gidadina into dining on a homemade meal prepared by him. He then left the formal room to retrieve Yamaria so she could join them. She was at the threshold of the office’s doorway when Yamaria caught her in a fainting spell just in time. He, unlike Yamaria, did not expect the worse.
“I have you,” Salvatore whispered. Yamaria was leaning into his strong, chiseled boy. “Did you find out anything? Were you able to speak with your aunt and uncle?”
“No, their line is not working and stay do not use mobiles,” Yamaria softly said.
“I made some breakfast and you need to eat as well. The roads have been closed for the unforeseeable future. We can try to reach them a bit later. Do not worry, the worse is over and you survived it. Come with me.” It was always his sincere, rustic rational thinking that provided Yamaria with the security and closeness she craved. Salvatore pulled out the seat right next to his setting and waited for her to settle comfortably before taking her chair.
“Hi everyone,” Yamaria forced a sullen smile. “You cook as well?” she asked of
Salvatore. There was not telling of what other surprises Salvatore would take Yamaria aback with. Gidadina and Basilia giggled while Salvatore blushed. Salvatore nearly coughed his orange juice but composed himself.
“Last night, or whatever night that was I nearly lost you—forever. I never want to
chance fate again, with such a possibility. You have had my heart in the most profound way and I would be a fool to delay this any further,” Salvatore said.
His prologue confused Yamaria. She was breathless and placed her fork gently on a linen napkin. Salvatore excused himself a moment and went to a small mahogany desk in an adjacent room near the foyer and returned. He faced Yamaria on bended knee, she began to quiver in anticipation. Salvatore presented a royal blue small jewelry box in his left hand. Yamaria tried to be patient. Salvatore began to speak again deliberately and passionately to his beloved.
“Before anything else happens in our lives, before another distraction, nervousness or external interference delivers another hindrance to us being together always, I profess my love for you, your heart to that of mine, a promise of protection, of joy, honesty, a long-lasting journey for us together forever. Yamaria, will you do me the honor of being my wife?” Salvatore asked.
Yamaria momentarily allowed her ladylike gentleness to escape her. “Yes,” she blurted, placing her right hand over her mouth to contain her excitement while Basilia and Gidadina applauded in approval and encouragement. With Yamaria’s answer, Salvatore used his right hand to open the lid of the small jewelry box to reveal a five caret, highest clarity-cut diamond atop of the most beautiful platinum setting.
“I pledge my love, loyalty and commitment to you a bond that I had never experienced before that I hope to share with you for the rest of our lives. I love you more than I can ever show… ”
“I will marry you!” Yamaria replied once more. Salvatore removed the stunning ring and placed it on her left hand second longest finger. They embraced as Basilia and Gidadina looked to each other, feeling a bit out of place. Yamaria felt their awkwardness and hinted to Salvatore with a nudge as they nearly forgot they were not alone.

Author Bio:
Patricia M. Muhammad is an multi-genre fiction author of crossover contemporary romance/science fiction, science fiction/fantasy, mystery, magical realism and historical romance genres. She has currently written 22 novels.
Patricia often incorporates characters of multi-racial heritage and interracial relationships into her books. As a young girl, she often found herself immersed in the stories of fictional characters; from animated animals to youth who were amateur detectives, to a young girl survivor on a mission to save her younger brother off the coast of the wilderness. These stories contributed to her budding imagination.

She is currently working on her next book manuscript.