You are here: Home / Erotica / Transformed into a Hot Babe by Daniela R. Lovejoy 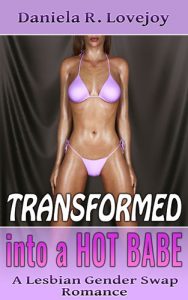 What to do when you have a crush on a hot lesbian girl and you’re a just a plain average man. Your employer has a secret experiment that can help you, maybe in a more different way than you ever had imagined…

Average guy Martin finds himself stuck in his daily life, partly because he’s just one plain man among thousands of other people at the huge science corporation, but mostly because he for months has had a crush on his sexy coworker Ida. A girl he can’t have because she’s lesbian.
When the company wants him to be the test person on a secret new project about “Change and Improvement” because they claim he’s the right man for the job, he accepts in hope it will make him move up in the world. Little does he know that the experiment will make him go through a major transformation process that turns him into a model hot female.
Now left as hot brunette Martina with no idea on how it is to be a woman he seeks the aid of Ida, surely she can teach a thing or two, and maybe this change opens up for a whole new chance with the girl of his dreams.

How Did You Come up With Your Characters?
For this book I'd a story and a path I wanted the main character to experience and from that developed my main characters to fit with in that scope but also try to make them engaging for the reader and their choices in the story logical based on their personality and situation.

Book Sample
“Here you go, Martin.” Ida handed me the paper, swiftly looking at me with her dark green eyes and usual cheerful smile. “Excited for the concert tomorrow? It’s been far too long since we did that,” she continued.
“Yeah, should be great.” I replied and gazed at her as she walked towards her own desk, further down the lengthy row of desks in the spacious open office. She looked as irresistible as ever with her long, blonde hair. She wore a nice navy blue blouse today, which were tight enough, that I could enjoy the roundness of her B-cup size breasts and flat stomach. Her waist curved out to a slender hip covered by a black skirt that ended before her knees and also showed off her cute round buttocks. Followed by dark stockings and office style, black high heels. She was fashionable and incredibly hot. My cock pressed hard against my pants.
I almost lost track of the time, I often did when I saw her, and leaned forward to study the report she’d given me, before anyone caught me staring at her.

Author Bio:
Born and living in the Northwest near beautiful nature with both forest and coast with in walking distance, Daniela likes to wander in those surroundings when the weather allows it. She enjoys the fresh air, and it gives her mind space to let new ideas flow.
When not writing, she loves to cuddle up with a book or watch a TV series or hang out with her friends and family.
Daniela have written short stories ever since her teenage years, but since the adult years she has had a sweet spot for gender swap and transformation stories focusing strongly on romance, adventure and the erotic. Daniela started writing them for her own amusement and to please her writing urge. She has now taken the leap and published a book and already working on her next.

This book is available in Kindle Unlimited: yes

Link To Buy Transformed into a Hot Babe On Amazon