You are here: Home / Bargain Books Under $3 / Rebound by Aidy Award 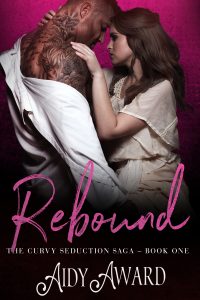 What Inspired You to Write Your Book?
The heroine of Rebound is a secondary character in my Curvy Love series and she fascinated me. She was sad, but strong and I knew something significant had happened in her life. Rebound and the whole Curvy Seduction Saga came to be as an exploration of what in the world might have happened in Angelina's past.

How Did You Come up With Your Characters?
All of my heroines are curvy women, like me. I've loved reading romance novels for so long, but there were very few women represented in them who didn't fit into that mold of traditional beauty. You know, perfect size six, long, blonde flowing hair, and blue eyes. I wanted to read someone like me. I wanted to see a plus-size women get a hot guy too. So, I wrote that book. The book I wanted to read.

Links to Purchase eBook version – Click links for book samples, reviews and to purchase
Is your book in Kindle Unlimited? Yes

For joining the author’s email/newsletter list you will get:
Welcome gift of a book in the Curvy Love series: Curvy Persuasion